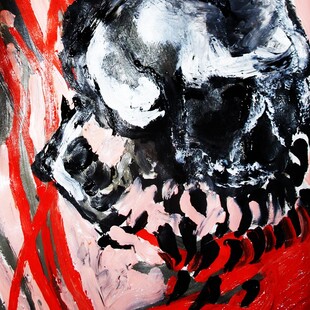 My return to the ninehertz fam like its 2012 through to 2014 begins with the pleasure of writing a review for a fabulous "fast" band from ‘Straya - Idylls with their new record, The Barn due for release in the UK via Holy Roar.

Idylls achieved widespread acclaim from musos via their previous dense, maximal onslaught of a release, the critically lauded Prayer for Terrene which made the faces of whiny normie shitbag losers melt worldwide with parallels drawn from Converge to John Zorn.

The Barn feels more on the art school angular noise hardcore spectrum with vocals higher in the mix than their previous stuff. It’s fast, throbbing, driving and misanthropic. If they were Poms they would be from Leicester, the pace and tone reminiscent of Lesta punx with hench drummers like Diet Pills and Drunk in Hell.

Idylls also have a sax which is utilised in a fun Nation of Ulysses playfully anarchic sort of way.

The overall feeling of being in The Barn is when it’s nearing midnight and the vast sprawling echo of the band is rattling off the condensation thick breezeblock walls of a dingy DIY space, your head being pummelled in whilst it catches up swimming with the anxiety quelling piss weak lager you’ve hammered. Its impossibly fast, loud and life affirming. Fuckin-ell.