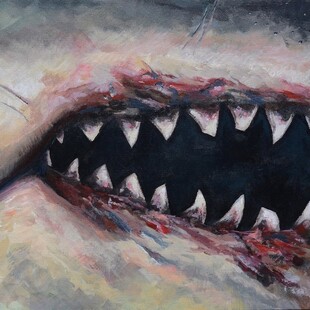 I've been listening to this for a few days now, at first in a stupor, really struggling to get to grips with what it is but more why I like it so much, finding myself returning quickly, struggling to put proverbial pen to paper to review. Then, now, still unable to explain but a state of acceptance if not of what to write, but regards how good this is at its best.

It's not that it is particularly weird, just hard to pigeon hole. The easy to describe facts are of a Californian four piece rising from the depths of the now departed Giant Squid; a concept album regarding a shark; a keyboard and, like our own Palehorse, two bassists no guitar. Squalus use the keys as a driving force, a kaleidoscopic painter, while samples along the album theme litter the tracks, often dominating the direction.

The first three tracks are excellent, Flesh, Bone and Rubber in particular, the way the creeping intro storytelling bursts out from the lyric "felt compelled to attack" into a wall of heavy bass is thrilling. Town Meeting is possibly even better, a waltzer ride of booming riffs, bright lights and motion-induced giddiness.

Highlights elsewhere can be found on The Orca, or the fittingly grand closer He Ate the Light. The USS Indianapolis starts as decent distortion-synth doom, before several minutes of depressive tales of the sea from a narrator who sounds just like the grumpy voice from Faith No More's RV, an oddly specific and irrelevant comparison I realise but one I can't shake so I'm mentioning anyway. He appears on the following minute of Show Me the Way to Go Home, a drunken sailor version of the pub song you know of the title.

As for comparisons or inspirations, if I'd have to commit then there may be something in the Mike Patton/King Buzzo lineage, running through Melvins, Fantomas, Big Business and linked outfits, but they are only fleetingly referenceable, the keys and divergences finding Squalus in their own whirlpools of influence.

During its peaks, particularly at its start, The Great Fish... is endearingly innovative and unique. Then there are periods where their desire to drive the concept overtakes the focus to the detriment of the music, and then a whole heap inbetween. You'd think it frustrating, but you can't help but admire the commitment to the playful artistic vision, and I'd take bands gambling on a different sound and winning some, losing others over high quality yet unoriginal consistency every time.