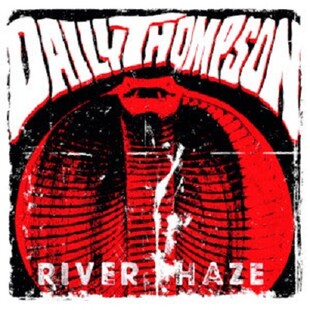 The best thing about H42 Records, the German vinyl stoner rock label, is that they know the power and allure of a good split release. There's a strong stoner tradition of split albums and EPs, and I'm particularly fond of the format, whether I know both, either or none of the bands, they offer variance and opportunity.

Much like Dananananakroyd, Leo Slayer or Shirley Temple of Doom, regardless of what they sound like I like Daily Thompson before I've even heard them. That's a band name and a half. As it happens they're a three piece band of German origin, and their offering here, River Haze is of pure stoner rock. They boldly launch outwards from the off, plying a fairly well worn stoner path, yet not annoyingly so. It doesn't travel far, harmless, yet it is hard not to warm to its fuzzy charms.

Flipping over, Danes Monkey Okay lay down a classic rock inflected version of the stoner blueprint, a swagger vaguely hinting at interference at the hands of Gentlemans Pistols' material. Josiah are another pertinent point of reference along the three and a half minutes of Cancerman. The title/lyrics are uneasily at odds with the care free nature, which is slightly distracting, but otherwise it rocks to a satisfactory degree.

Two tracks of stoner rock that does nothing you won't have heard before - it'd be easy to dismiss, but actually this is likeable throughout, and... Daily Thompson. Good work.