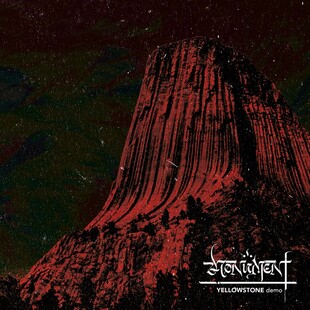 Monument are a two piece, vocalist/guitarist and drummer, from Bologna. Yellowstone was recorded in an abandoned farmhouse; listed as a demo you can hear its recording frailties but they're not a distraction and add to the feel.

The four tracks are split stylistically in half. On one hand you have a post-hardcore, noise rock approach, beginning with Mars Balaclava, creeping guitar and spoken vocals all attitude, it reminds me of Helmet's Meantime. But it never gets going, always lacking the oomph or tempo that would carry a necessary threat. Supersesso (Mammuth Man) opens with a raw, garage buzz guitar riff, with a slightly discordance with its timings, its repetitiveness, something of Unsane in here, maybe at a stretch The Heads as well.

The other side of the coin is more of interest. Magnitudo is atmospherically minimal, then stoner rock guitars, very lax but a palpable sense of agitation gives it an uncomforting yet welcome unpredictability. It ends in sparse psychedelic meandering; it is a decidedly compelling track. Ronin is again slow, psych, a doomier tone to the guitar, long pauses, breaks from the silence that threaten to erupt but restraint remains.

Yellowstone isn't amazing in any way, and there's obvious limitations. Yet Monument sound that little bit different from any genre norm, enough to stand them out from the vast majority of bands, and as such I can't help but like this, particularly Magnitudo which I'm sticking back on again now. It will be interesting to see where they develop to from here.