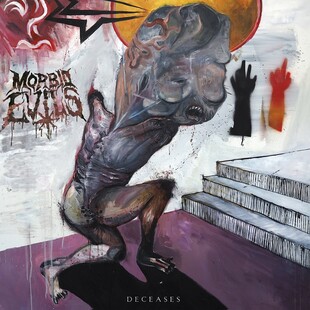 This music may never be pretty, but Morbid Evils excel in seeking out the most disturbing and darkest corners with their potent explosion of deathly sludge and doom. While some may allude to a joy of drink, centre around their obsession with weed, of proffer good vibe riffs in amongst their sludge, Morbid Evils, as showcased on their mesmeric last album In Hate With the Burning World, offer only blackness, sludge blood-splatteringly forced through a death metal shredder.

Deceases is more of the same, but intensified. Case I - Murder lurches forward with an incredible weight, a steamroller revolving with little speed but immense power and a direct line to your location. I say this not just as another analogy of heavy doom - this really does sound heavier than 99% of anything like. The production obviously deserves a doff of the cap, but the devilment in the attack delivers such a turbulent threat. Case II - Dead Weight's cataclysmic drum and riff combinations create headfuck swirls from which death metal blasts erupt.

The Finnish trio are consistent in their depraved outlook, but there are flecks of variance. Case III - Evaporate's slow desolate doom for example, with only a faint nod to a big end Conan'ish riff/vocal styling and even a distant melodic strain possibly detected despite itself. Case V - Death Breath further brings in funeral doom funereal pace, a dangerous sense of the unhinged.

Morbid Evils are not easy to listen to, but nor should they be. Deceases is less immediate than its predecessor (although saying that, it's near impossible not to get caught up in the mighty bellowing riff of Case VI - Abacinated and Blind), but ultimately, this is surely how extreme metal should sound - the best of the weightiest genres, fucked up and played with reckless bludgeon.