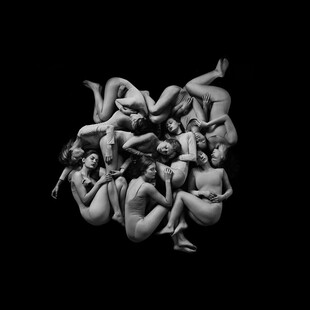 Celeste are the purest of the crossbreed of black metal and hardcore, always inventive, always maturing, offering glimpses of post-metal ambition without losing anything in terms of weight or attack. This is their sixth album, their blueprint now down, the early strains from opener Cette chute brutale instantly familiar, definitively Celeste, defiantly brilliant yet again.

Second track Comme des amants en reflet demonstrates their skill, their method of wrangling raw emotion from bleak harshness, a great display of heaviness that is truly engaging. There was a fear that Celeste might have let up somewhat since their last, Animale(s), four years ago, but there's none of that, the years on the road have made them if anything more furious in sound, and retaining that focus they have always had that makes them sharper than the vast majority of their peers. See Tes amours noirs illusoires or À la gloire du néant as further, fantastic examples.

I can't quite put my finger on exactly why, but Infidèle(s) feels instinctively more approachable, more seductive than ever before - the relatively short tracks keeping it fresh and focused. (I) does bring in the post-metal development influence, but serves to offer alternative, never dismantling the heavy, clouded construct to this point, and when followed by the magnificent Entre deux vagues, the ferocity is startling.

I've seen Celeste live for the first time in the period since their last release and it was an unforgettable experience, yet I did wonder if they could maintain their run of special releases, perhaps just because it has gone on so long - bands have to wane at some point, surely - but Infidèle(s) shatters those doubts, an album up there with, if not above, the peaks of albums past, utterly superb.