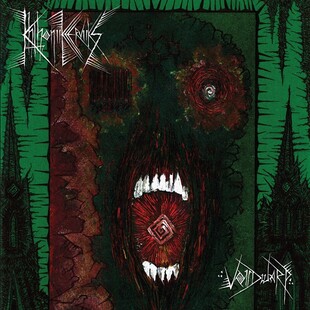 A split CD release through I, Voidhanger Records between two notoriously deranged outfits, with suitably twisted artwork, this promises to be an ordeal, one way or another.

Howls of Ebb have form, a couple of albums prior at least that singe, besmirch and regurgitate extreme metal conventions in a most uncomfortable way. Here, their three tracks take on unique identities, all characters you'd cross the road to avoid an unprovoked fight or airborne infection, all the while unable to take your eyes from. Babel's Cathechism makes you wonder, if a bunch of doped lunatics were locked in a room, nought but scratchy black metal albums fed through a tannoy and instruments strewn around, if after a few years they'd conjure a Howls of Ebb track. With Gangrene Edges sounds like Venom suffering from paranoid delusions while stuck in a gaudy carnival funfair, while you approach Bellowed as you would an internal-fire lit cave, a wizard within casting spells in increasingly loud and crazed chants, the latter accompaniment of instruments only casting the shadows farther exacerbating the emanating dread.

Khthoniik Cerviiks demonstrate that they too can be awkward, as Spiiral Spiire Stiigmata begins, manic death metal and wild thrashing around yet a real sense of innovation, a bizarre yet honest attempt to harness their eccentricity toward something unnervingly unique. At twelve and a half minutes this allows for ebbs and flows, passages of black metal spite, changes in pace and sudden sharp direction shifts. That it becomes relatively clean sounding two thirds the way through is only in fitting with their unpredictability, and proof they're not here to make a mess of grunting noise for the sake of it. Come to the Subeth is less slapdash than the start of the last. This is wonderfully constructed death, still obliterating the landscape despite a more thoughtful approach. Before I was reminded of the likes of Orbweaver, here the imperious strides made by Bölzer.

Howls of Ebb are a glorious world unto themselves. They are thoroughly entertaining lucky dip, yet as your childhood will attest, the excitement is in the surprise and the unveiling, and the prize is one often quickly forgotten - while this was good, whether I'll listen to it again in any hurry is a doubt. Meanwhile Khthoniik Cerviiks, it is evident, are great. This split is awkward, constantly convulsing, spasming outwards at unknowing turns, exposing hidden dangers and worrying flashes of demons as light passes over. But then that is also what makes it better and more engrossing than most extreme metal you'll hear, that sense of danger, of bands unafraid to drift away from the towline.