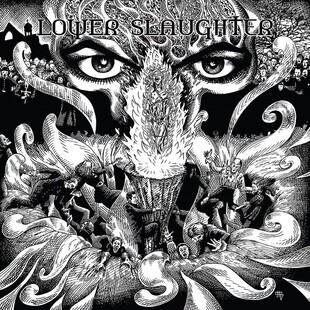 Lower Slaughter have rather abruptly and to my surprise gatecrashed my albums of the year so far list. A new name to me, but apparently well respected in the underground even ahead of this their debut album, I find them to be always intriguing and invigorating at the same time, where their 90s hardcore, post hardcore burns bright lights to attract you in, to get you moved and moving.

There's more to their hold on my affection too - metallic leanings, even stoner rock flourishes, divergences from the standard playbook that not only appease my personal love for the heavier notes, but provides What Big Eyes with a subtle individuality that will resonate to all. Above and beyond any analysis deeper than a surface scratch, flowing through its DNA, is a vibrancy that constantly emits.

The quality bobs along at a high water mark, rarely dipping, highlights frequent and therefore highly subjective. For me, the starter of Bone Crunch is one, brilliant even prior to when it slows and bellows with a metal crunch near its end, or Take It, which'll get you dancing, and that's before a distinct Kyuss vibe invades the atmosphere. To be honest, my initial excitement probably overstates this cross-pollination of metallic influence, but there is an undeniable heaviness retained none the less.

Yeah, truth is it's just a great punk record. See Tuberculosis Bad Choice for evidence, or the excellent following Teeth, by when I'm listing modern UK bands it reminds me of; Community, Hex, Love Hurts or even (pre Hawk Eyes) Chickenhawk's infectious groove. It is all rounded off with Coming Up, a blur of Bleach Nirvana fury.

This is not something I'd usually be particularly into, but they drew me in within a minute, held my gaze and lead me astray; I'm a convert by album end. Lower Slaughter have many more in their sights, do not fear succumbing to their will.