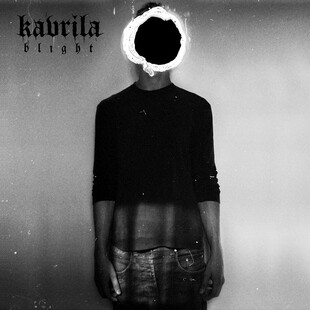 Hamburg's Kavrila impressed many with their Rituals I EP last year, so it's grand that they've returned so quickly, with this their first full length release.

Much as with the EP, there are comparisons abound with their compatriots in Mantar. It is evident from the off, Each sharing that vitriolic punk vocal over hard hitting hardcore that is fought over for for supremacy by doom and black metal forces. The album is short and to the point, nothing outstaying its welcome. Despite the ugly beginnings of Lungs the pace of the riff reminds me even of Torche, albeit where the pink and rainbows have been replaced with the monochrome daub of last night's corpse paint. It is, for the main, a grimacing shriek into the dark, slowing from halfway to further isolate the pain expressed.

There are other pointers too - a loose atmospheric black metal fog haunting the backdrop to Abandon, nods to Entombed particularly in the second half of the album as well. Demolish is the stand out, raw adrenaline driven punk that is all sweat and mosh, pure Cursed goodness, fans of Trap Them will find their kicks here too. It's damn good.

Nothing else grabs you to the same extent, too little completely owning your attention, but it is a very good album none the less. Focussed and forceful, Blight is another gnarly doom/black/hardcore hybrid that for all its outward aggression is happily addictive.