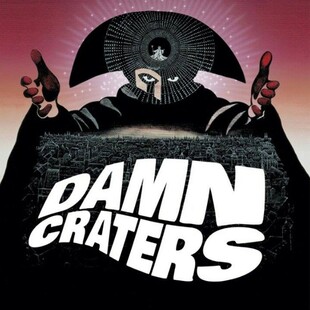 A new band out of the midlands, Damn Craters have a good stoner vibe going on, this three tracker a flawed but decent introduction. There's definite potential for them to move into the vacant stoner lords of Nottingham title, last held by Old Basford.

Bin Money launches from the press play, a forceful groove, guitars that contain a bite, existing somewhere between grunge and stoner rock, although it doesn't progress greatly. Monomyth starts a bit dodgily, generic stoner with awkward lyrics diverting the attention, but a few nice guitar touches bring it round, and then the vocals improve, directly channeling Maynard James Keenan, conjuring a whole new outlook.

The best of the lot, the track that convinces you this is a band to keep an eye on, is the finale Fighting in the Caves of Drach. It takes me a minute to put my finger on what the intro reminds me of, and even then I'm torn between Allen's Wrench and Shinobi vs Dragon Ninja (an outcome that hangs from a precipice, but I'll leave at that)... then has me singing the quiet passage from Palehorse's Holy Trinity Church Student Bar... it kicks into a cool Soundgarden style riff, always held back a touch, with a strong sense, even vocally, of Unida. Damn Craters wear this slower pace well.

Raw, and straddling a dangerous path between two beleaguered genres that few have successfully navigated, Damn Craters show enough to demonstrate they can breath life into such a sound, and with the last track in particular evidence a bright future.