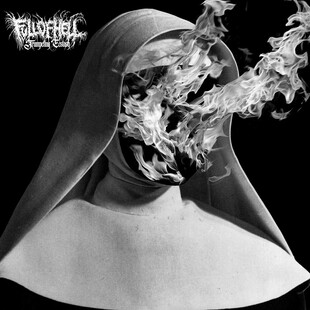 A new Full of Hell record is approached with a requirement for the right mood, cleared headspace and a fair degree of caution. A band with past collaborations with Merzbow and The Body, you know what you are about to receive will challenge and require strict attention in the face of a headwind barrage of multi-extremity barbarity. When ready however, there's few more appetising.

Twenty three minutes covering eleven tracks, Trumpeting Ecstasy is an experience akin to being strapped down in a wind tunnel. The core sound is of death metal soaked grindcore, with nods to black metal and sludge. Branches of Yew's sub minute grind combines black and death vocals, while Fractured Quartz manic death morphs into ripping hardcore. Gnawed Flesh could be a vocal battle between death and grind for supremacy, the culmination an attack on the senses. There are definite sludge influences around too - reminders of the mechanics of Soilent Green to be found in Bound Sphinx and Crawling Back to God.

Naturally there are variances - the title track in particular a maelstrom of powerelectronics and guest female vocals, from Nicole Dollanganger, a gentle haunting voice not unlike Beth Gibbons, a beacon of levity amid the ultra-harsh industrial landscape. Further guest appearances from members of Isis, Converge and The Body are dotted in and about. The closing At the Cauldron's Bottom stands out also, the track length (over six minutes) allowing for a repeating, slowing doom riff to develop.

Trumpeting Ecstasy sounds amazing, crisp yet begrimed, and utterly relentless. It doesn't vary often from the death/grind as much as you'd think heading in. And that's for better and for worse - it certainly doesn't detract from the album's quality, but perhaps is limited in terms of the scope you thought you might be approaching as you press play. Ignore those preconceptions and you're left with an exceptionally good album, a statement of focus and ferocity.