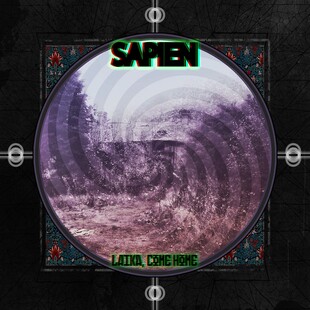 Sapien, from Edinburgh, lack not in ambition. Laika, Come Home is a dynamic release bristling with aspiration and what you sense is a grand vision. Pulling together post-metal exploration under doomier clouds, with tracks (intro and interlude aside) ranging from six to thirteen minutes, Sapien aim high.

The first song proper, Signals perfectly encapsulates their intention. Energetic, it runs on a pair of big riffs that are part progressive metal and part sludge doom heft. It rolls along with enterprising spark, with an impressive midsection that's somehow post-metal with stoner leanings. It's all reminiscent of the debut album of their compatriots Dvne, which is no bad thing. It is, however, arguably overlong, burning out before its end. Desolate Waves is similar in the concoction of Mastodon stylings on stoner settings. Despite a couple of variances in direction, it doesn't travel far - a case of good, but not doing enough, especially with over seven minutes to play with.

Myötähäpeä conjures welcome reminders of Taint in its opening, before it settles into a trudging sludge riff; okay but stalls the momentum somewhat and drains the attention. Drudger is more directly stoner/sludge, to a pure southern fried NOLA inspired degree to begin, although it does vary its pace later on and the ending is worth sticking around for. The closing Laika is a thirteen minute plus indulgence that doesn't justify the investment required.

I may have been critical here, but it's not because this is a bad record, more that it's frustrating - there's some great ideas just not utilised to their most potent potential and they too often overrun the tracks past the point where their development has been exhausted. For all that, it's important for me to express, Laika, Come Home is still a good record, with enough hints that future releases could remedy my concerns, and lead to Sapien producing something outstanding.