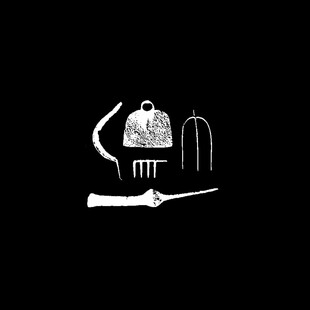 What is it with Bournemouth? There's been countless amazing bands from there over the last ten years and here's another. Strung out and decidedly brutal, this is a one-sided C40 from a bludgeoning, noise-driven bunch of mysterious dudes.

This single track is an exercise in measured torture. It combines sheets of rusty-sounding feedback with bursts of cutting guitar and raw, throaty vocals. When the guitars and drums do chime in together it's not unlike that hammer-blow feeling you get when SWANS are fully in flow. The kind of music a friend of ours once described as 'takeaway doom', as in the drummer could play his part, go and order a vegetable biryani and still have time to come back and play his next bit.

Through the screamed vocals, there's a pretty damning piece of brain-dump going on, the happy-go-lucky strains of: The hoarse, goatish laughter of Man/ Anonymous, or not Man at all/ A fondness for delicate eyeballs/ The blackness of pupils, gaping/ Sharp, dismal instruments fits the music perfectly.

At times the feedback does take over like a black fog, which means that again, when the rest of the band cut back in, it does feel like being clubbed rather hard in the face. There's a primal feel to this that you won't find in most doom or sludge. At times this feels like the sadistic and rasping style of Steve Austin's unfiltered rage in Today Is The Day, at others it simply sounds inhuman and utterly unique.

Put this on if you feel you need to self flagellate aurally or simply need something to drown out the rest of humanity. The tape comes as a limited run of 100. Grab one now before they go and do yourself a favour by listening to their release from 2015 Songs For The Saved here.