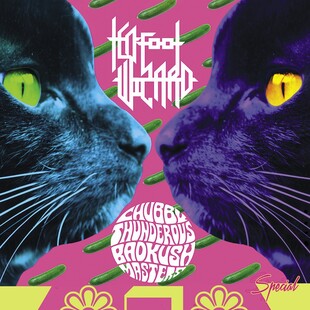 This promises to be a high-times good-vibe rip-roaring run through two of the more boisterous bands of the UK stoner underground, a two-track each vinyl split between Chubby Thunderous Bad Kush Masters, representing the South, and Ten Foot Wizard of the North. There's a track each featuring vocals from the other band as well, to cement the collaborative theme.

Chubby Thunderous Bad Kush Masters' debut release Earth Hog signalled a band embracing the full force of stoner bombast, and their contribution here builds on that and more. Dunkerque is incredibly heavy, incredibly fuzzy, full of riff and all out brilliant. There's little more to be said. Nutbar, named after the Garth Elgar quote which opens the song demonstrates how Chubby embrace the hard rock gumby buried within all of us, furthered through thick tarred stoner riffs containing a viscous tone. For all the frivolity, the 'Masters really lay down some serious stoner doom.

I have had my reservations about Ten Foot Wizard before now, having not been taken with them on the solitary occasion of witnessing them live, but that was some time ago now, and here they win me over. Get Fucked begins with a raw garage-rock guitar line, followed by speed-snorting rock n roll that celebrates the sheer fun of the likes of Bad Wizard. Night Witches is all big sound, booze soaked exuberance through the dominant vocals, slightly off-putting, but there is a cool nod to Alice Cooper's School's Out at the start and ultimately it'd be mean spirited to say anything negative of this release.

Chubby Thunderous Bad Kush Masters continue their upward, so far faultless trajectory, and I'm finally converted to the cult of the tall Wizard. It shows that a posi-vibe within stoner rock does not have to sound hackneyed, cliched or corny. This is indeed what splits should sound like - two bands absorbing and growing from the energy of the other, putting their best out there for all our benefits.