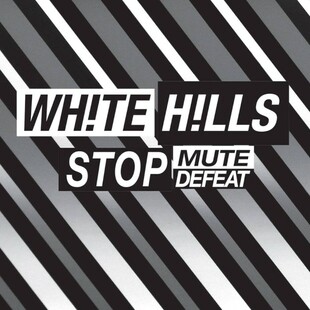 This one will confuse a lot of people. Given their past as a spaced-out psychedelic and guitar-based entity, the duo of Dave W. and Ego Sensation have created a sound here that is industrial in approach, pounding and club-like in direction but no less trippy for it.

Opener Overlord comes loaded with overt political tones, samples crashing off a constant beat and a bassline that could soundtrack smoky after-hours bars where people argue endlessly about art or the future.

'No one is safe' intones the refrain to A Trick of the Mind which again pounds away to dark, almost gothic vibes.

Such is the gear shift in their sound you wonder if White Hills have come to some sort of crossroads of creative frustration or whether global events recently have shaped their sound so much they feel they have to hammer their very outward image to this extent. This is to their credit however, to remain in a rut can kill creativity. Tracks clatter with an almost minimalist, arthouse cool that brings to mind The Velvet Underground or Sonic Youth, the latter of which's one-time producer Martin Bisi is at the controls here.

It's not until the fourth track Attack Mode that even a hint of guitar being used or at least sounding like one occurs. This shows what a minimal and stark record this is, but also underlines the overall tone. It's angry, defiant and seething under the digital surface. It's as if the noise elements of the sheer attack and crackle of stuff like Atari Teenage Riot has been distilled and made cooler, calmer and more focused. Sounding impossibly 1980s and brashly modern at the same time, it's certainly a record you'll have to dip back into again to fully have sink in.

Comparisons seem to have been made elsewhere to 80s alt pop and that's right on the button. Shades of The Human League or even the more avant-garde Coil slither to the surface. All in all, an album that will divide opinion, but then don't all the best ones?