Demon Head Thunder on the Fields 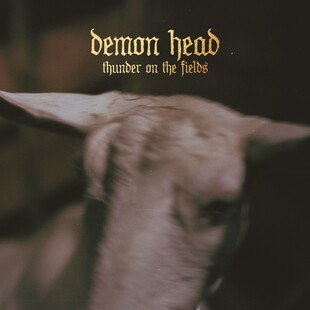 Copenhagen's Demon Head return with the rather excellent Thunder on the Fields, apparently the result of being locked away in a cabin through the last winter months with their instruments and a 16 track tape. That retreat to nature and isolation obviously works a treat.

This is uncomplicated but classy heavy rock music of bygone decades. They channel many of the early heavy bands of the 70s, but always with their own voice. There are inevitable comparisons to Graveyard and Witchcraft, but unlike the majority of the hordes that rushed to follow in the footsteps of the Swedes' proto-doom revival prototype, this feels authentic, a genuine affection for the sounds of the past. There are no telltale histrionics either, no try-hard bombast, instead a dark, soulful rhythm throughout.

Album long, the mood is overcast, the tone of the guitars hanging with sorrow, backed by a rich but downbeat lyrical narrative throughout. The words of the closing Untune the Sky - "I'm beginning to fail as a human" - demonstrating that tone. While it rarely gets your hips moving, it doesn't exactly wallow in misery either, more a sober and content reflection. The standout We Are Burning is the perfect example, talk of "pitchforks and halos" and losing your way, atop Dexter Jones Circus Orchestra-like layered guitar, quite something.

The title track is similar quality, storytelling blues that it is hard not to get wrapped up in, conjuring images of The Wicker Man: "in the valley people whisper, children choose the chosen ones... they gather and they worship what they do not understand... in the houses of God here, they declare war on life". This is the magic of Demon Head, the perfect match of musical vision and artful lyrics so that the listening experience is illuminated with thoughts beyond the immediate musical thrill.

Forums - Reviews and Articles - Demon Head - Thunder on the Fields