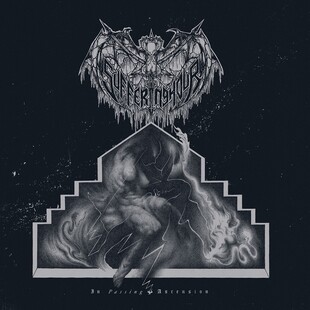 This is some announcement. Minnesota's Suffering Hour arrive with an album of such magnificent scope that it's hard to believe this is their debut. Working within the confines of black tinged death metal, they pull all the base elements in various directions, yet maintain a core within the death staples at all times, the net result a mastery of craft akin to that forged by Bolzer or Mgla.

In Passing Ascension is belligerently and unremittingly dark yet awash with experimental colour, not what you'd label as psychedelic, instead a fearless adventurous streak that warps and perverts the home genres as to sound twisted and fresh. Large sections of the first song proper, For the Putridity of Man are decidedly death metal, but the track takes on a life, a breathing pulsation through almost Portal-esque reverberations. Devouring Shapeless Void follows, impressively technical but that never as an unwelcome cold distraction, a surprising trance like state generated. By this point, you already know this album is something special.

The quality continues - The Abrasive Black Dust, twiddly, belligerent, melodic even, then brutal. The longest track, Procession to Obscure Infinity is a masterclass in the sonic possibilities within blackened settings, provocating your imagination down dark corners - a kaleidoscopic descent into a black hole, the inescapable onset of a bad trip - unwittingly but undeniably wonderfully. Empty Avowls is the album's final outing, atmospheric black metal expertly executed.

For all the avante garde approach it is startling how this cosmic outlook is seemlessly built into the bludgeoning death metal, rarely pausing to display obvious distinction between styles, instead running both through the same vein. It is this that makes In Passing Ascension a progressive, pioneering masterpiece.