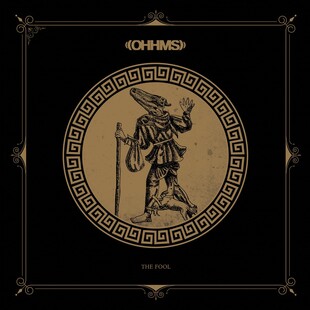 Ohhms are a funny beast, arriving unexpectedly with a splash heard loud and wide, a young band with fully formed proggish visions within heavy terrain, into a national doom scene burgeoning bright and ready to accept any bold new pioneers. They have split opinions, those welcoming their flourish of innovation, and those who see them as jack of all trades of post-rock/metal and doom, rather than masters of concocting some new bold direction. Their ubiquitousness across press, social media and in the live setting (if you've been to any doom - or for that matter merely metal or alternative - festival in the underground in the last few years you no doubt will have seen them), and their rather manic performances therein, further polarising and confirming both ends of opinion.

Going into this I'm Ohhms-agnostic, cautiously on the positive side, looking to this new album to clarify my view, hoping The Fool will blow away the doubts and truly elevate Ohhms to the platform they aspire. The package looks stunning, a tarot-themed concept complete with random cards sealed inside each purchase, but the music is the only true test. The first song proper, The Magician, commences promisingly, a nice headrush heavy beginning, before stalling a touch when the vocals enter alongside a plodding riff. It settles into decent slow and dense doom, but then diversifies into something else, a clean(er) vocalled passage that is is post-metal-lite and for some reason sits uncomfortably with me. Perhaps it's a recent-years-Mastodon dynamic, but whatever it is I can't quite put into words my unease.

The Hanged Man is better, an open expanse generated that showcases Ohhms' potential in creating grand plains of sound. It sits beyond the harsher ends of post-rock sensibilities and is done well, but then takes a turn for the bizarre with a groove riff that wobbles distressingly along a tightrope between sludge and nu-metal. It doesn't belong, and perhaps highlights a band overflowing with energy and ideas, but not enough control over them. It is thankfully only brief, and the track's thirteen minutes play out in a manner befitting the beginning. The World is relatively straight forward, as Ohhms go, even at nearly seven minutes it is their shortest track to date, minus the acoustic prelude Shuffle, Cut and Reveal that opens this album. I'm not sure if it is because of this, but it is the easiest to warm to, never dipping or distracting away, it flowers with post-metal awe.

Poised to go either way from here, the album sadly peters out. The Lovers is an inexplicable sickly ballad, a duet with guest female vocals. I could say in many words how much and why I dislike this, but would rather not dwell on it, it already haven taken eight minutes of my life. The closing The Hierophant is back to the epic lengths of Ohhms to date, all 22 minutes of it, but little at all happens for the first eight, little of interest for the first 13, treading water between. It does get better, a touch, but it is a lot to trawl through for so minimal reward.

"This honeymoon is over" is one of the final lyrics, and as their debut album wraps up it certainly feels true for Ohhms and their place in our world, their cards now fully on the table. Whatever is said about Ohhms, their confidence, scope and daring has to be admired. The Fool will do little to change existing opinion - and while that means for the few who bemoan their ever-presence will not be turned, it is also certainly true that existing fans will flock to this. Possibly more than ever before I'm struggling to decipher what is merely not to my taste and what is fair critical assessment, but for me, The Fool is a flawed album that disappoints more than it offers hope, and one that turns my indecisiveness into a definite turn towards the grumpy group of the unimpressed.