Mountains Crave As We Were When We Were Not 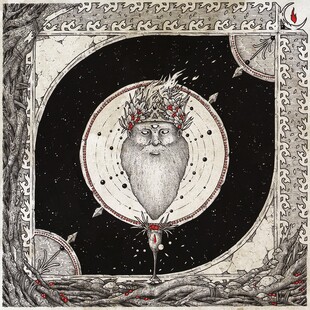 Mountains Crave have generated something of an excited buzz in the north over the last couple of years, through raucous gigs and the well received self titled release. Hailing from the traditional hardcore base of the Leeds underground, they stand out somewhat with their modern black metal sound, but like with any band from the West Yorkshire stronghold, there is an inevitable and impressive list of ex and concurrent bands their members have on their duty sheets - here A Forest of Stars, The Afternoon Gentlemen and Gets Worse among them.

What is immediately evident, and impressed upon you after only one run through is the maturity and grand scope Mountains Crave have aimed for and achieved here. An album built around a concept of Aldous Huxley lecture material, evident in the lyrics, it befits the atmospheric black metal sound, the long titles, plus Undersmile's trademark gothic inputted through guest appearance adding to the impressive scale approached.

Ynisvitrin mixes between a progressive sound and more straight to the point black metal, the sharp shriek vocals at times masking a more mature sound than pure second-wave worship. It flowers outwards six minutes through, blackened leaf and stem it may be but a definite growth towards the light; the twiddly last minute further develops the track, one that gets better as it progresses.

Istigkeit (We Saw Them of Old) contains a fuller black metal sound instantly, reminds me of their red rose rivals Wode's amazing debut of last year. It's the shortest track on the album bar the interlude-ish title track, yet travels further than any other, showing multiple faces from gentle through to fierce, changing paces and all out to atmospheric black metal. It's very good.

Clear Light of the Void goes through the range of emotions with mood tampering evolutions and lyrical richness, while Arise O Magnificent Sun, a title straight out of the hymn book, is slow and brooding; it slips into your conscious and only as it nears its end do you truly realise the excellence, so wrapped up you become.

Every time Mountains Crave crossed your path to this date demanded tabs be kept on them, and this is why - because those impressions displayed a band with the potential to release something thrilling. The brave new world of As We Were When We Were Not is the fruit of that promise.