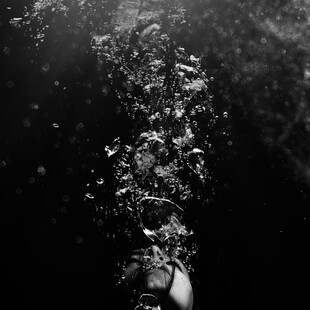 From my years living in Salford, if that's the river of the title on the cover then she'll need an update on her jabs and to be kept an eye on for the onset of pneumonia. There was a pub we frequented down by the Irwell's banks, and at night the rats streamed up into the beer garden, from the shopping trolley infested waters. But Salford was more than the downtrodden, worn down city in the shadow of it's more illustrious neighbour Manchester than it is often dismissed as - a city of community, dignity and pride, a place it was a privilege to call home.

Black metal has a long history of centreing itself around heritage, although largely of course that linked to the frozen lands of Scandinavia, Norse mythology and dodgy nationalist politics. Cold Fell instead speak from and of the North, of working class struggles, of city life and suburbia. While black metal will always portray an inherent negativity, there are shards of light and of defiance here that pierce the blackened veil.

That said, Irwell shimmers with an ever present ferocity, pinning you back. The opening Skull Crushed on Salford Cobblestone's straight up black metal is fierce, pausing only briefly, but that itself only serving to amplify the voracious beat it returns with. Folly (Health and the Glory) is the standout, albeit with stern competition, a slight air of atmospheric black metal while retaining full levels of volume and aggression. The riff summons a rolling in of cloud and thunder to blacken the Northern skies, a thrilling storm of blackened energy and venom.

Cold Fell manage to portray a modern sound upon and through traditional black metal structures. Spleen I (In Vino Veritas) offers moments of levity, through mood and texture, without compromising any viciousness, an emotive connection established through the mire, while it's sister Spleen II (Bruised Like Fruit)'s sub two minutes threaten through the repeated vocal of the title's parentheses. The narrative of The Whip (Armed to the Teeth) is instructive, lyrics bemoaning the "filthy fucking satellites of suburbia", then "we take desolation or we take claustrophobia".

There's a strong contingent of northern British black metal around nowadays, a vitality in the grimness that is a match for anything globally. Caina, Winterfylleth and Wode are all a part of that, and all from the Manchester area - Cold Fell can now be added to further embolden the scene. Irwell is some statement, an album of black metal excellence.