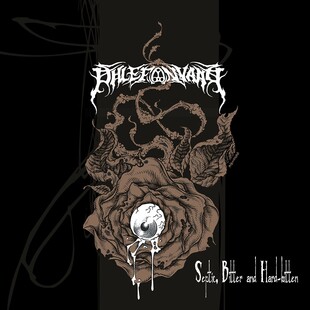 As hard to pin down to a definition as they are to pronounce, Phlefonyaar offer forth an album that, while in the neighbourhood of a vast army of doom bands offering variations on a common theme, resides in the outskirts, sounding just that little bit different from anyone else to truly fit in.

Which, of course, means they deserve more than a cursory listen. Two aspects particularly set them apart - their doom being of the grimiest variety being the first, but then that's not wholly unique, but when underwritten with a ubiquitous industrial tattoo, beating a cold robotic heart throughout, you find something new and at the very least intriguing.

The standout Temple Bells After Midnight announces the two piece's intent, opening with echoing machinery noise of an abandoned factory, then accompanied by seriously downbeat doom from the same plagued mindset of Grey Widow, the mechanical background noise an inhuman steady percussion. The ever present noise that creates the murk within which the album wallows is brewed through a mixture of the automaton noise, horror film-like samples and what sounds like the opening door noise of Doom (the video game).

The vocals are a slight concern at times, containing just enough grime and tar to match the darkened skies cast, but only a little more than your average gruff gravel that can be heard fronting numerous sub par stoner sludge bands. Phlefonyaar are at their best when they are their furthest away from a pure sludge sound, where they lapse into the generic, but thankfully the majority of the release thinks along the same lines.

Slow Death and Procrastination's downtrodden riffs explode forth, the drum machine precision blends in Misery Loves Co. clanging percussiveness against the filthy doom sound. If you've had the (mis)fortune of happening across Finland's Morbid Evils and their vicious doom, Phlefonyaar evoke similar feelings of misanthropy.

It sounds raw and not perfected and the limitations of the two piece are evident in passages, despite the wall of noise they concoct. At times you will them to take it on another level of pure Lord Mantis with a Godflesh makeover style doom head fuck, something they don't manage. But there's potential for Phlefonyaar's future in this regard, and the basic rough nature only adds to the degenerative atmosphere. The quality does rise and fall, but overall there's nothing quite like hearing a new angle to your favourite sounds, no matter how battered, bruised or for that matter mechanicalised the form of that innovation takes.