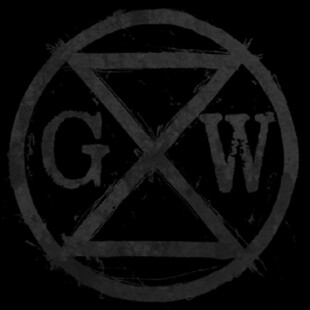 Grey Widow return. It's not been long, but since the release of I three years ago (subsequent splits not withstanding) the UK doom underground they are part of has only grown further. Many of the newer faces have followed them down the narrow well into the sewers of blackened reverberation of doom, but few come even close to matching them in drowning out all light and blotting of the air through a purity in heaviness.

They persist with the exclusion of track names, again numbered in sequential order following on from previous releases, 11-14 offered here, covering close to forty minutes between them. XI neatly clocks in at eleven minutes and eleven seconds, a full sound quickly into the repetitive rhythm creating a viscous tar of sludge and droning doom, from which eruptions blast through periodically, sparks from the magma that reach the surface, blast out, and'll have your face off if you're stood too close. (See below for an exclusive stream of XI.)

XII plays with the repetition-as-weapon method of assault, launching into a large riff that is then stretched, manipulated and tattooed along the song's soul. A rare quieter moment, four or so minutes in, only gives time to clear the runway for the inevitable return, the vacuum a perfect place for a bolder and heavier reentry. XIII has an upfront momentum, the sounds of undead armies mobilising, an undeniable groove. File alongside IV and X of previous releases as an example of prime Grey Widow - where most others have to choose between desolate, droning doom landscapes and more immediate riff thrill, Grey Widow at their best manage both in the same track, placing them apart from the majority of their peers. An ominous cloud hangs overhead throughout XIV, where the subtle note changes remind me of Black Cobra's stupendous Omniscient. It ends in a lurching, energy sapping (if basic) doom chug riff, and repeat, no respite given.

Recorded at Skyhammer studios last December, II is all but ready to be unleashed, pending a label to put this out on 12". If there's any sense, there'll be a queue to take this on. For as oppressive as this is, as much as it bites, screeches and blackens your mind, Grey Widow maintain that ability to trap you within, to submit to their pummeling doom repression.