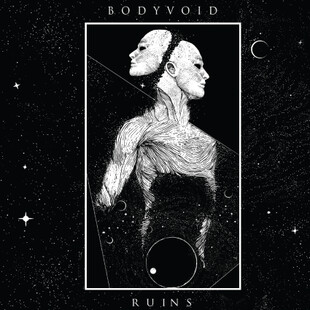 A monstrous, begrimed riff, a collective hammering of instruments, screeches to the void, yet there's more than stand-still nihilism, moved onwards aboard a crushing doom propulsion. It's all rather good, so much so that even on my first run through I'm repeating it instantly, before I've even got to the rest of the album.

So begins Ruins, from San Fransisco's Body Void, the opening Swan an introduction to pull you in, kicking and screaming maybe but with a willful glazed-eye acceptance. Erased is equally ferocious, equally absorbing with its fast thrashing start, the punk venom then melting into sludge corrugation, further applying the brakes into the densest throes of doom, the track as a whole an aural equivalent experience of being involved in a car crash while travelling at high speed.

After a belligerent four minute opening of Monolith, dragging you through the dirt, it threatens to jolt upright, the remainder of the track a balance - no, a battle between its natural instinct to wallow deep within itself and the desire to arise, a prisoner fighting against its captor's restraints. The closing title track, sixteen minutes in breadth, is ever metamorphosising, variations in pace, mood and aggression. There's even some emotional uplift past the ten minute mark, a rare vulnerability to the cold face presented.

More good work from Dry Cough Records, who deal with the UK release of this excellent album. The core to Body Void is the lurching, lumbering doom that plays on your sanity as much as your patience - and they do it extremely well, but the awakening additions of sludge, punk and hardcore enliven Ruins and elevate it beyond standard comparisons and pigeon holes. This should allow for a wider accessibility (albeit it relative), and it deserves as much, for this really is wonderful.