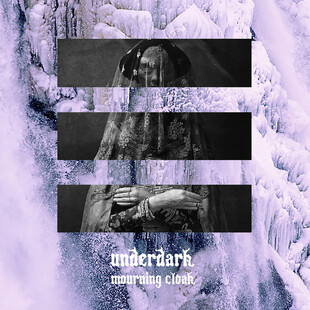 Released in the middle of last year, the ever dependable Third I Rex perform a service to us all by releasing Mourning Cloak in physical form this coming March. Based in the ever fertile Nottingham, Underdark deserve as much exposure as they can garnish.

As recent as it is, the modern phase of atmospheric black metal mixed with hardcore and shoegaze (blackgaze...) sensibilities already holds fears of bandwagonning, a trend as opposed to a sound, leeched upon by many with too many WITTR records and too little distinction. Yet, it should be remembered, nascent as the scene is there's still the potential for development and excellence, and Underdark slot in here. This three track release instantly places them alongside the likes of Mar, Dawn Ray'd and Mountains Crave in the UK black metal / hardcore undergound for their defined niche.

All three tracks deliver, all definitive, always captivating. There are nods to the might of Wiegedood, particularly on the phenomenal opening Bank of Roses, and to post-metal nous - the break down / build up / blast out ending of Span of Black Nihility the most pertinent example. With Bruised and Bloodied Feet dredges the depths with death/black vocal beginning, before settling, near five minutes in to post rock timidity to close out. All I can find to complain about is the terrible band name.

Done wrong, as can commonly be found, modern atmospheric BM can be clunky and overreaching, but, remarkably for a debut, Underdark never betray any inexperience. Done well, there's the spectacular contrasts of beauty shining through from within typically feral outpourings. Underdark, to this album's immense credit, regularly close in on that contradiction.