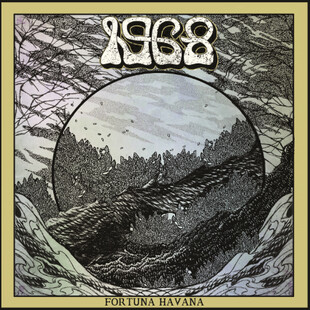 Born too late, 1968 reflect their retrospective gaze in style and in name. Already well along the way to becoming an establishment within our doom underground, this EP should further their name and cause. Fortuna Havana, recorded at Skyhammer studio on the Wirral, released on Conan's Black Bow label, is to be their calling card, a powerful statement of North West stoner rock vibes.

The EP inevitably has plenty of nods to the classic rock, and the beginnings of the route towards the birth of heavy metal, of the year of their name. Yet there are also memories evoked of UK stoner rock past, such as Hangnail's Ten Days Before Summer or Sally's self titled debut. This is, need I say, a good thing. The first of the four tracks, Vorpal, is quick to establish this, avoiding any Americanisation of the sound that occurred with so many, or the tiresome tropes of the current genre's stragglers.

The following War Dogs' big riff start welcomes in with beefy arms. 1968 have a real grasp of their art - there's familiarity with what they do, but the ear for a tune, and finesse in not overblowing any of the delicately constructed roles of each band member allow it to pass through a fine filter of taste, whereby many of the signatures - the "southern" stoner sound, the raspy vocals - would normally become stuck. The first few minutes of Duchess are the only time my mind is allowed to drift, but when the skies darken, eclipsed by a doomier-than-before riff, it is most welcome. The closing title track progresses into a land somewhere between Clutch groove and the subtle and sure hand stoner touch of Greenleaf, after an opening minute that I'd happily hear them jam out further for mutliple more.

Looking back, its amazing how much of this feels like I've heard it before without any sense of the band overwearing already trodden paths. And more prominently, the consistently high quality throughout, helped by the EP format, points to an extremely appealing release, that'll get many full runs through for the rest of the year. If their full length, pencilled in for the coming months, can match then 2017 can be 1968's year.