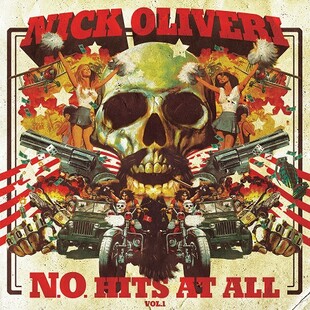 This is a pretty neat mini-collection. A grouping of tracks from various bands which Nick Oliveri has provided guest vocals on, this is a record you'll feel you want to own as it's a fairly unique idea. Ever creatively restless, this follows not long after a compilation of Mondo Generator and other Oliveri solo work, and not too long before his latest band venture, Bloodclot, release their debut (also featuring ex member of Cro Mags, Danzig and Bl'ast!).

First up are Komatsu, and sadly for me, the weakest moment here. The Dutch stoners make all the right noises, but it's largely generic stoner rock, predominantly that big groove riff thing going on that's ubiqeutous in what remains of the scene nowadays, popular it seems but not for me. The vocals aren't particularly distinctively either. There follows the first of two Death Acoustic tracks, a cheat against the theme of the release really, the membership listed as Oliveri and Rex Everything on guitar, the latter his Dwarves era pseudonym if memory serves. Despite the coarse lyrics ("I'll fuck anything that moves, I'll even fuck you") and basic set up, there's a discernable link to the desert sound he descends from, a flow in the ending similar to that of his old band mate Brant Bjork's solo material, with an inevitable punk smear.

Next up is a cover of Black Flag's Revenge, from Winnebago Deal, a band he recruited into Mondo Generator for a while. The Oxford Bens have been relatively quiet the last few years, but this is a reminder of when (and why) they used to be on every support slot going round the country, never allowing you to settle into a gig quietly, a raucous garage punk racket. It's easy to see why Oliveri feels at home here, the quick, faithful blast a reminder of the sense of fun the Deal guaranteed. Flipping the record finds Svetlanas, Russian hardcore punks covering Motorhead's Speedfreak. Again, the band, the song are a natural match and an indicator of Oliveri's personality in finding like minded souls to listen to and jam out old punk records.

The second Death Acoustic track covers Bl'ast!'s Time to Think and Surf to Destroy. I saw Oliveri's acoustic set a few years ago, and for all the highs of the Kyuss tracks, the stripped down hardcore covers were excellent, bringing them into a new light. It all ends with Eccentric Man, a track also covered on one of the more listenable Desert Sessions, here with Oliveri joining one of the incarnations of the Groundhogs (non-McPhee version). As you'll know if you're familiar with the original, it's a great song, offering a further change in styles and further proof of his good taste.

There's mixed feelings about Oliveri, past misdemeanors and splits from bands lingering in the memory of some. As he sings on Anything and Everything "I've been in trouble for violence". But you look at the bands he has been in there is an extremely talented man underneath who has bequeated some amazing music to us all. When he played his acoustic gig, in an out of town real ale pub, he was outside with us all speaking with everyone, getting kids up on stage with him at points. And that's what you sense here, someone with a love and thirst for playing music. This isn't breaking any new ground, and therefore obviously not essential, but it is an album of friends playing punk rock, and ultimately, purely, a cool record.