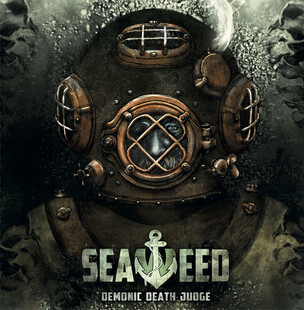 This is the fourth album by Demonic Death Judge, but I must confess the first I've heard of them. The Finns' press blurb boasts of a psychedelic sludge sound, which certainly sounds interesting. Having been through the album a couple of times, where the psyche reference comes from eludes me. Perhaps it's a hangover from earlier material.

No, this is sludge alright, straight up. Taxbear opens, slow, simple and sludge heavy, dredging a line in direct heritage of Weedeater. It is reminiscent in the vocals and with the groove found within such murky waters. After a promising start it doesn't develop greatly. Heavy Chase has stoner rock beginnings, the repetition in its middle testing the patience rather than building any suspense, before breaking into something a little cool, along the line of union where stoner and sludge caress without the need for doom chaperone.

The title track is the album highlight, a proper Bongzilla styled blow out. There's something about it, an atmosphere generated that deviates from the script elsewhere just a fraction, elevating it... if not above their influences - as this is still all too close - then at least to higher plains. It is Demonic Death Judge with their own identity, one to judge against and with a welcome end ruling. I'd listen to more of this band.

Cavity is a relatively melodic instrumental interlude, but as the volume inevitably rises, there's little in terms of progression, it doesn't turn to heavy but the subtlety it desires is lost with some confused ideas. Backwoods begins in standard Weedeater style, before developing some classy guitar work latter on, and the album peters out a little from then on, until the ending of the final track Peninkulma adds some welcome grandiosity.

For fans of the sludge purveyed by Weedeater and Bongzilla, if you're happy for bands treading into the same footprints as long as the bong waters remain full, then this is for you, no question - it is riff heavy, with undoubted talent and some decent songs. Sludge as a whole struggled to find originality for a fair few years, but nowadays that barrier has been smashed down, with bands trampling forward without fear or boundary, and for those fans who have progressed with them, there's little to excite here.