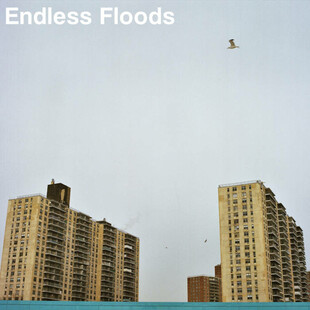 Monarch!, such an impressive band when in the flesh and in your face, prove a challenge on record; long, almost impenetrable tracks of darkness that last for days, endless spirals of depressive doom. So when members of the band feature in a side project, namely Endless Floods, you wonder how they'll differ, whether they'll break the shackles of their main function. Yet opening this release up presents three tracks, the first and last taking the best part of three quarters of an hour between them.

For while the imposing 24 minutes of Impass may be de rigueur for Monarch! or for that matter releases on Dry Cough (one of the labels putting this out), it still feels like a foreboding proposition to begin.

The track ebbs and flows naturally, collapsing to an almost close ten minutes in, it resusitates with a rare propulsion, relative of course, and a step increase in heaviness. It all goes quiet fifteen minutes gone, a gentle rhythym of guitar and percussion breezing through on the lightest of winds. It nods to the ambient perimeters of post rock as it leads out.

The mood is hard to gauge, never reaching the bowels of hell such elongated intropection can portray, but is it wistful, morose? I suppose its open to how you experience it, and for me, for all the overwhelming sense of doom, in both ways, there is an unlikely lack of gloom, a yearning towards the light, despite the shrieks from the dark.

Following the melodic, acoustic interlude of Passage, you strap in agan for the near 20 minute Procession. This leads in to darker territories, only a few bars above Khanate levels of minimalist doom. It opens up from there, flowering out, all the while maintaining a haunting background, a threat in the air. As before, the length afforded to the track allows for different flows, a storied evolvement, and this relaxes half way through to a dream-like state, one which doesn't wake until three minutes remain the break of guitars an awakening gong. This builds to an increasingly fuzzed and static-clouded crescendo, a cathartic, appropriate ending.

II may share much with Monarch! releases, but it is in shades of subtlety that they vary, and offer glimpses into the need for a separate outlet for the band members to express. I have to admit that I can't see that I'll reach for this often, but even as a one off it offers a compelling experience. An intriguing and changing picture is painted, one that would, for example, aptly accompany a lone forest walk on a winter's day.