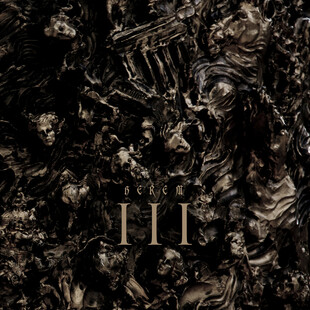 Finland's Herem are on to something special here. III is a behemoth of an album, a dense, heavy monster tapping into an array of metal extremeties with consummate skill and artistry. A doom underbelly and strong black metal vocals are omnipresent, but from there, across only five tracks, Herem explore and diverge.

What's most impressive is how it all gels, and how they excel wherever they wander. Key to this is a full blooded production, lending a weight to even the most melodic of passages and a foreboding to the darkest corners. The emboldened doom of Scars to Summon is a distinguished beginning. The following Snakes of the Moon is better still, morphing into sludge effortlessly. It borrows vague outlines from the US giants of that scene, but with a distinct Eurpoean blackened frost covering to move away from simple copyists.

Slumber is the pinnacle however, a nine minute exploration around the houses of the unholy. The mellow, melodic start is surprisingly psych stoner rock, before collapsing into a death doom funeral march, a lurching sludgy riff then propelling it forward. The vocals, venomous throughout, truly bite here. It develops further, stoner riffs dredged through the swamp, fractious soloing, a new sludge sound born by the end as the song reinvents again. It's magificent really. The album ends with Edge of the World, slow and brooding, a touch of My Dying Bride or old Katatonia, droning along at its end on an increasingly repetitive and heavy doom riff.

References to multiple genres, distinct by track, can sometimes point to an unsettled album, but far from it here. The mélange of styles affords Herem a platform above the crowd, a beacon transmitting a grand statement. Whether you consider this doom, death doom or sludge is largely irrelevant - it is all of these things, and it is superb.