Astray Beyond the Heights of Lust 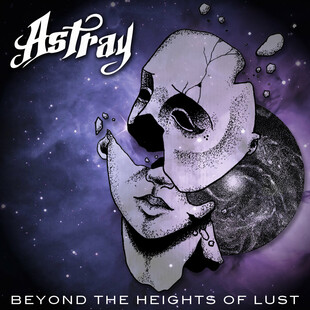 Astray ply their rock very much in the vein of Wo Fat, Lo Pan, or before them Sixty Watt Shaman and the like. And despite hailing from Thessaloniki in Greece, there is more than a nod to an American-aping sound throughout this release.

There are two sides to this album that are reflected neatly in the first two tracks. The first is a very familiar, uninventive but still pretty attractive stoner rock as represented by Teetotum, a passable beginning that draws further attention and reward when it briefly slows in the second half, to a sludge-light, Down-alike riff. The second trait is shown on WiT(HC), which feels undercooked and forgettable.

The latter trend unfortunately edges it across the full length, with the vocals inconsistent also, fine at times, but reaching too far and occasionally lessening the impact of some of the better moments. The later songs of the album often frustrate rather than inspire.

Of the highs, Last Ray is the stand out, an all round strong outing, a cool vibe reverberating similar to early Deville output, and the instrumental Huh? builds into a strong finish. While Cartridge's funky fuzzy riff is initially a thrill, once a comparison to Unida surfaces, the connection is so close it sits a little uncomfortably.

On one (convincing) hand this is merely another stoner rock album, with little in terms of frills or distinction, nor advancement, but there isn't much truly wrong here, and a couple of nifty little tracks. For stoner rock fans devotedly married to the sound as it was, and happy to lap up anything continuing in the same trough, there's fun to be had Beyond the Heights of Lust.

Forums - Reviews and Articles - Astray - Beyond the Heights of Lust