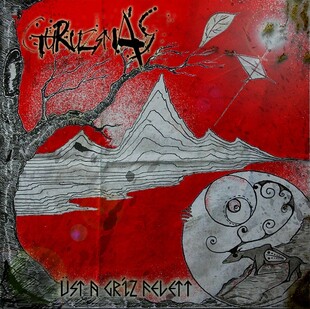 For all the many emails we receive with demos and promos embedded, that are vetted for potential review, one with a press blurb defining the attached as "alternative psychedelic experimental progressive industrial shaman post-folk rock" from Hungary, I'm amazed how much I can't draw myself away. Guruzsmás are instrumental too, one of my personal dislikes in general, yet they indent themselves on my consciousness, bringing me back again and again.

The self-descriptor is pretty accurate (minus the industrial element), trippy playfulness, conjuring images of different worlds, of their eastern-European homeland, but also further afield, North Africa perhaps, through their multi-instrument folky charms. Key, for me, are the clear passages where the band rock out, lose themselves - not content to meander aimlessly in pure psych haze. The ending of the title track barges through the intricateness that came before to lead out in style.

The bassy busyness at the start of Nyitás a Kozmosz felé could be the derangements of Dyse, blunt with a smile, while Éjjeli hús evokes Crumbling Ghost's doomed folk yarns. There is a central psych prevelance that will be approved to fans of the likes of Mugstar, all the while grounding it to their locality through a distinctve folk edge.

Üst A Gríz Felett is enormously relaxing and intriguing, but surprisingly the defining emotion is one of fun, evidently in the creation of the music, but passed on through the songs and shared with the listener. Well worth your time, to bask in that same sense of travel and adventure.