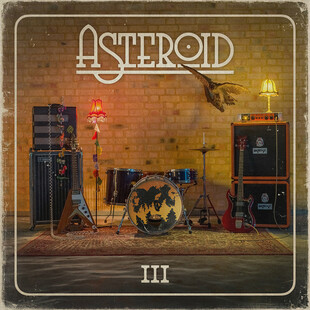 Over ten years old and only just reaching album number three, here released on Fuzzorama, Asteroid aren't in a rush, yet they retain an allure, and a loyal fanbase. From the same Swedish stoner rock and proto doom scene that has given so much through Witchcraft, Graveyard, Dead Man and Truckfighters, there is a weirdly homely feel to hear this new music, borne from such a rich river of resource, from talented guys playing rock music from another era yet feeling fresh and alive.

Pale Moon instantly lays out the mood. It may be restrained in intent but sets the scene, a 70s soaked atmosphere gently washing by. Til' Dawn bears a strong early Graveyard mark; Asteroid's trademark warming vocals rise up, reach out and grab you to elevate the track higher. When Wolf and Snake gets going, the fuzz riff is pure stoner rock, excelling in the mid-90's sound, not the pale imitations that have largely followed, unsurprisingly in that fact bringing up reminders of their label owners Truckfighters.

To paint the full picture, there are a couple of lesser moments elsewhere, Last Days plodding along in uninspiring fashion, and the uneventful Silver and Gold, but they're quickly forgotten - the closing couplet lead out in fine style.

The retro doom sound may have stalled recently, stoner now long proclaimed dead, but every now and again fights against the dying light shine through. Asteroid have the calibre to hush those doubters, for III is a worthy record, a statement of a sound still capable of drawing you in, and of what Asteroid are all about.