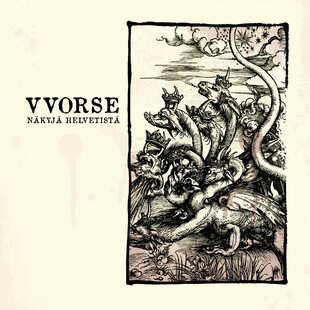 If I were a gambling man I'd bet good money on Southern Lord sniffing around Vvorse as we speak. A barbarous, heavy and glowering crust outlook, with a doom air clogging the lungs, the Finnish four tick many of the right boxes, adding in a commendable edge of their own.

Näkyjä Helvetistä transitions between punk snarl and sludgey grimace fluently - as can be seen from the transition between the raw and fast title track to the weightier Painajainen, equally enticing. From the off they build up a head of steam, a full burst along a dingy hardcore line, a doomy air with crust velocity.

There are hints of variation, drops in pace and mood that stop this becoming a 15 minute breathless blast. There's an occasional hint toward post-metal largess, and at their most fluent a melodicism of the darker end of Deathwish Inc output. The brilliant Haudantekijä in particular showcases all their craft. The superb Dark Circles are a good point of reference, the same genre bridging mentality and ear for riff and tune.

There is no major invention, nor even a mass reinvention, but this is a sound vehemently their own, and irresistably likeable. Black clad and patched up, fiercely intent, this is typically Scandinavian, simmering intensity and excellence seemingly effortlessly exhuded.