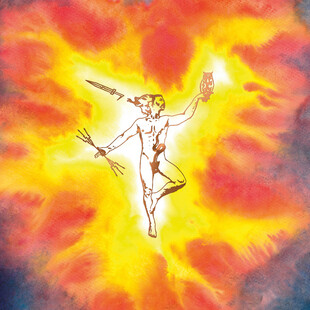 Bölzer's debut album has been highly anticipated for a while now, having released only a few EPs to date, their extreme-metal-plain spanning sound having captivated many, particularly via their ferocious live outings. And finally it arrives, with press blurbs informing (warning?) of a cleaner sound, cleaner vocals, can the Swiss enigmas deliver on that expection? As emphatically as you could wish, Hero does so, and much more.

Yes, the black metal grime smear has been bristled away to a degree, an instant put off to many no doubt, but only the most obdurate will be disheartened for long. Certainly by the conclusion of the second track, The Archer, many will be converted. This is bewilderingly good, reaching effervescently outwards, pulling from all manner of sounds and genres, with a healthy reminder of the rolling thunder of High on Fire at their very best.

The title track is similarly inspired, while Phosphor blisters as it rolls over and over. Then there's I Am III, Neurosis levels of grandiosity approached, a mind altering journey of a track that takes time to level out from at its completion. Chlorophyllia's oddball vocal moments add to a strange air of uplifting turns bursting from the mire. There are moments of discovery at every turn.

Hero burns like an exploding star, unpredictable, beautiful and violent, a cosmic feel created in the sheer scope explored within. The EPs promised much, but Bölzer here have climbed atop the pile, a dizzying ascension to extreme metal royalty.