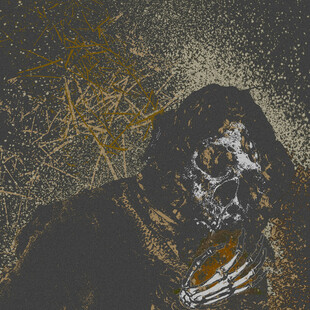 As you no doubt know well, Primitive Man are an intimidating proposition, a black hole of the darkest ends of doom despair, a byword simile in endless reviews for any drawn out, fucked up doom excess. Ethan Lee McCarthy, not content with being responsible for disgorging their toxification, also moonlights in Vermin Womb, here submitting their second release.

Their debut, Permanence, was a brilliantly harsh assault of mixed metal extremeties. Here, there's not even a pretence of threat, going straight for the throat. There's a blunt template the breadth of the album, a grind death burst every track, a drumbeat that could blast through concrete, an explosion of energy ever present.

There's the odd subtle change across tracks, the relatively expansive middle of Industrialist, or the slower paced closing Cancer, but generally it's all out barrage. The opening Entomb finds you with its grinding embrace, obtusely fierce in greeting as if putting up an antagnostic front to annoy, to toy with your patience. And if there is a personality to the album, then it's of someone trying deperately to piss you off, to not be liked, yet finding the harder they try the more people are drawn to them, a nihilistic circle of loathing and attraction.

Even within its own genre, this is particularly grimy and sheer heavy. Decline somehow manages to eclipse its predecessor in terms of metallic aggression and beligerence, losing some of the distinction but replacing it with unwavering battery. Vermin Womb, much more than a side project, are an intimidating yet pulsatingly addictive proposition.