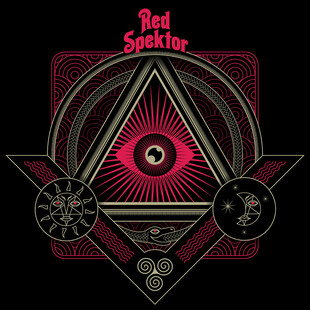 What makes reviewing this record difficult and easy at the same time is that I have personally spent a lot of time with Red Spektor; I received a copy of their album a short while after its release earlier in 2016 and listened to it back to back for about a fortnight solid. It appeals to me having followed them since the early days of us (1968, Sam's band - editor) sharing the bill with them so when they released this, I was intrigued to hear.

For those of you that don’t know Red Spektor, they are a three piece, retro, psychedelic, stoner blues band...which I’m sure you’ve all seen the format before with the likes of Cream, Hendrix et al. Hailing from Stoke, they travel around the UK in their badass V8 Chevy truck (of which I have had the pleasure of hot-boxing many times) brandishing their own brand of groovy, hip-swinging blues to all that are wise enough to witness.

Their debut album, released on Kosmic Artifactz records, is an absolute killer. Not only was it recorded straight to tape in a mere 7 days...but, I say this in the most unbiased way possible, they are a great band, live and recorded which isn't an easy thing to be these days.

I mean, if your band releases shite and I know you, I will say, friends or not, there are too many bands out there as it is, your stuff isn’t all that welcome anymore, because everyone is at it...recording straight to tape shows a commitment that very few bands I know could follow and well, is welcome to me at least.

Spektor pull back the ring-pull on their album with Before the Sunrise, fading in with fuzzed out feedback and drum patterns that fumble their way into the first verse with random precision. The song itself is held together mainly by the bass work of Mr. Robert Farrell who thunders away in the back of the opener, in my mind’s eye, I can see the bastard swinging and playing that line with all the tone that a bass player should have. Wah-drenched guitar flows over the rhythm section throughout with the ever-cool drawl of John Scane which basically sucks you into a grotty flat in the 70’s that stinks of patchouli and hash. Wonderful.

Creeping in like a drunk uncle at Christmas, is Pagan Queen, of all Spektors tracks, this one is a belter, I mean, it’s pretty standard format for psychedelic blues but what they’ve done is simplify it, stamp it their own sound and fire it back out like Hunter S. Thompson’s ashes in the desert.

What does intrigue me about Red Spektor is that they don’t rely on special effects, in their own image or sound. To me, as a guitar player, most players I know in bands would panic at the thought of not having a small arsenal of pedals to use to make it sound interesting, not Spektor though, they keep it simple and use what they have to great effect...Basically, Orange amplifiers would do well do throw them an endorsement as they’re the only ones making their amps sound ‘right’...in my opinion of course.

Thumping ears next is Timeless Requiem which has starts with a banging, phased-out intro that starts as it means to go on, almost becoming hypnotic then getting stopped when most listeners will want more. Star of the show on this track is Darren Bowen who batters the drums like Ike Turner after a night on Stella...with Tina...yeah.

Following suit with the groovy blues side of things, Cosmonaught is the next track, this one is the track that showcases some serious duelling bass and guitar, this track could well be 40 years old, I mean, it has all the characteristics of Entwistle bass runs, Ginger Baker swing and not to mention Peter Green inspired licks.

Slowing the pace of the album is always a bold move, Elixir, is the way to do this, paving the way for your sonic pleasure is Darren Bowen again, throwing all of his Bill Ward tricks into this track. Swift rolls and effortless swinging beats. Other interesting points to this track are the lack of guitar during the first verse, just a growling bass-line coupled with that vocal again to bring into a climatic chorus with yet more wah-infused solo.

I have a love-hate relationship with wah-wah pedals, I love the classic Hendrix use, SRV and all that but part of me feels that less is more is the future with them...then again, if you don’t rely on many effects, you must smoke what you have...

Next up is Into the Maelstrom, this is Spektor’s most psychedelic effort on their album, to my ears, it is their weak spot, I mean, the vocals are nailing the whole ‘Leslie-speaker-Planet-Caravan’ thing but to me, it just repeats too much on me, a bit like going swimming after garlic chicken kievs. You only do it once...so I’ve been told.

Fields of fucking Fire, well Fields of Fire, this track just kills all. Super fuzzed out guitar, plenty of crashes, plenty of rolls and more swing than John Holmes without any more for drugs. That voice is back on fine form, just another head banger or ass-swinger for you to get down to.

Torpedo Head, sticking with the formula that has worked wonders for them previously, this track has potentially the most retro feel about it.

Minimal guitar and explosive rhythm behind it, this track showcases John Scane’s vocals in a slightly different way, I can’t put my finger on it but it has a slightly different feel to the rest of the album, it also lends quite a bit of early Sabbath worship too, which, well, let’s face it, that’s why you’re on this site, isn’t it?

Black Moon Rising, continues in the same vein, I have heard Spektor close sets with this bad boy before, plenty of wah here...difference is, it’s drifted into Geezer Butler NIB territory, which is, as we all know, fucking timeless. As the guitar solo screams into this song, we have complete Iommi going on, tape echo and a tone that is enough to make everyone want to sell their set up and start again.

Ending on an acoustic track? Can anyone do that? Does anyone do that? This track, Lost Soul will divide many with its Zeppelin influenced hums and singular bass drum...personally, I love it, I think it’s a perfect way to end a record, it’s got a similar swagger to the Stones’ exile period when they were all battered on heroin and it smells like the inside of Spektor’s own van.

To cap all this off, this record won’t change your life, if won’t be something you think you haven’t heard before (what is these days?) However, if you dig your blues, you dig your stoner and you wish bands were as good as they used to be?

Then buy this on whatever coloured vinyl is left, turn off your phone, pour yourself a strong drink, fill your pipe and play it as loud as fucking possible.