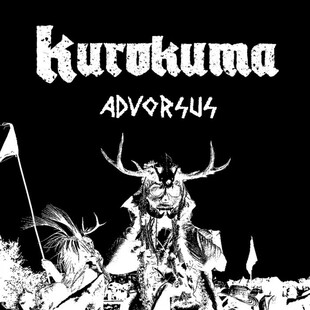 Like a creature moving in darkness, the music of Kurokuma from Sheffield is something which is quite hard to actually focus on. Live shows we've witnessed bristle with a volume that destroys the hairs of the inner ear, clanging metal bars, additional percussion and a rather intimidating level of confidence on all fronts all contribute to an uneasy and electrifying atmosphere. Until now, there hasn't been something that quite matches that feeling on record.

With this three-tracker, the trio have laid down their vision with more clarity and concentrated bile than their primitive demo. There's a strange interplay here between the brutal metal sections and deathyl vocals with the distinct world music influence that lies beneath. At times vocalist Jake sounds for all the world as if he is in a 90s death metal band, think Nile's Karl Sanders gone belligerent sludge, but the variation that happens around this gravelly, low-end and rage-filled voice is where the maelstrom becomes interesting.

The music moves slowly and methodically, even when sections seems to be played in shredding styles. It's not unlike a black metal method, churning something truly evil in slow motion. Songs also move between sections effortlessly, bringing in that bell-like metal bar smash and the tribal elements of bassist George's driving additional percussion. Psychedelic is a word bandied about too freely at the moment, but Kurokuma do invite you in to their mesmerising Venn diagram of styles, blindsiding you with the heavy elements, yet keeping you engaged with other, less meat-headed endeavours along the way.

Lyrics here are blunt rather than poetic, Dark Triad for example runs with the following dogma: 'The strong do what they can/The weak do as they must/Some were born to serve the ruthless/We were made to rule the others'. This could almost be a reflection of the trio's brash and uncompromising live style, often you will see evil grins forming on the trio's faces live, as if their sound is being wielded as a sonic weapon.

As menacing as that sounds, this is a release that invites you to listen a few times before the trauma starts to make more sense. There's clearly more going on with this than you hear on initial spins. One of those elusive animals has been unleashed here, one that crushes, yet has a dark beauty underneath.

See what you think, just don't approach with any hint of trepidation, Kurokuma smells fear.