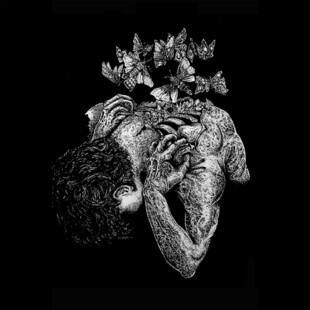 No idea why I thought Conjurer were a doom band, maybe it was the name.

Turns out it's nothing of the sort. Like the chugginess and almost gothic elements of early Opeth? Want that served with a post-metal crunch and sense of the epic? Conjurer could well be your new favourite band. I've seen these guys appearing on bills on those gigs that I really ought to be at these days but don't make it to on a regular basis, and now I know why.

I has the dubious title of a 'mini-album', quite why it's not an EP is anyone's guess but yeah, it's magnificent from the very start. I mean, fuck, the first song has a line - 'I have sinned beyond repentance' - screamed with such conviction you almost want to call the police. These guys mean it and it's not blunt, stupid malevolence taking place here (like much of the sludge scene has worryingly headed recently) but calculated, brutal and just clever shit.

The comparisons to Meshuggah have come thick and fast here, probably due to the clinical sections they partake in that sound a little machine-like, but rather than descending into bore-fests of time signature wankery, they seem to take perverse pleasure in the whole off-kilter, strange twists and turns they hammer out. Certainly keeps the interest.

The vocals are incredibly varied, moving from deathly whispers to full on metal roar in seconds. There's a lot going on from second to second, you often find yourself caught in its slipstream and wondering quite how you ended up in front of such hulking, monolithic chunks of sound.

Oh, and they can out-doom a doom band too. The epic Frail sounds like My Dying Bride gone more metallic, seriously sounds like a more accomplished Aaron and co from around 1993 when they had the deathy influence. Conjurer could well be the great hope we've been searching a while for now. Exciting, epic and just plain, great? Check them out now, I'll be trying to find their next show as soon as bloody possible.

Forums - Reviews and Articles - Conjurer - I