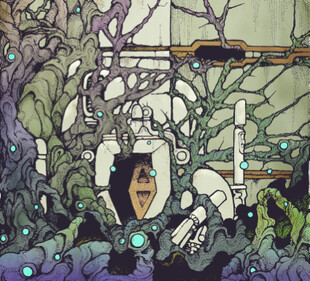 Just hearing this, even on the practice room warm-up that is the opening track Estronomicon, is heartening, back in the comfort of the embrace that is their art, the sound instantly, definitively that of Slomatics. They've been going for a dozen years now, ploughing roughly the same deep groove, but every time they return to record it's a revelation as fresh as the first time you discovered them.

For they are, in a sense, mavericks, which is an odd description for a steady diet of keeping it simple, keeping it heavy and keep hammering out the riffs, but in many ways their template can be seen as originator of the modern British and Irish doom uprising. They have obvious links to Conan - label, studio, split, gigs - but their influence spreads right across our islands.

Future Echo Returns follows on from the excellent Estron of 2014, and is said to be a conclusion to a trilogy of albums that began with A Hocht. It pretty much goes without saying that if you know Slomatics you know what you're going to hear here, but they hold a magic spell that holds this only as positive. Electric Breath is the perfect example why - a relentless repetition of riff, whirring, undulating, forcing its way into your synapses, immensely satisfying.

The midway point of the album, Ritual Beginnings, is a break from the norm, from the barrage, an atmospheric interlude that could sountrack a downcast sci-fi. Rat Chariot immediately launches you back into their day job, heavy from the off. Here, and on the following Supernothing, there's a wafer thin reduction in tempo lending an increased concentration in the make up that makes it even more the heavier.

If Slomatics are a band you are familiar with, then Future Echo Returns is a welcome return, a band seemingly unable of weakness. And if you're new to the band, then this is as good as place to start, as good as anything they've done. Then work backwards through their multitude of works, quickly. All of which could be interpreted as a band treading water, but far from it, they simply maintain doom heaviness of the highest order. Typically Slomatics, typically great.