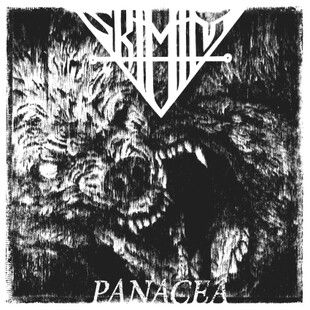 It's second track, Ebony Grand Master that draws me in. What seems on the surface as standard extreme metal fare, from a band new to me until this album arrived for review, changes and launches outward. Opener Place a la Comedie is decent enough, but then that is followed by a glorious concoction of equal solution black metal and punk, glowing like the best of Okkultokrati, or Mantar's vitriolic smear. I'm fully awaken to Panacea now and delve in to the full course of twelve sittings.

Sektemtum, having departed with their vocalist and returning from a five year hiatus, apparently decided to enter the studio and record this without rehearsal, an urge to put their creative impatient energy down on record. This is audiably evident, for better and for worse.

For better - there is a manic, all over the shop vitality that surges through much of the content, lurching across stylistic inputs to the black metal base that creates a guessing game for what will come next, a patchwork approach that can clash violently, brazenly, track to track, and leads to some highs, the punk element already mentioned, a delicate touch nodding ever so slightly toward Alcest territory (on Empire, particularly excellent with the harsh black riff at its end), but also some awkward lows, such as on check-you're-still-listening-to-the-same-band weird cocksure hard rock that greets the start of Le Crepsule des Idoles. Which brings me on to...

For worse - the album doesn't feel coherent, it feels rushed, as it appears they are admitting to. It doesn't feel like an "album" as such, more a collection - an overflow - of all ideas not thought through, mapped out or perfected. Passages frustrate, others plain don't work.

For all the pissed off venting this record represents, and for all its definite faults, there's a fair bit of fun to be drawn from it. The black punk fusion flame burns quickly, but is thrilling while alight, and some of the core, less is more matter is of a solid quality. One to endure with and pick out the highlights that come along, at unevenly spaced intervals, as it does reap rare but truly rich rewards.