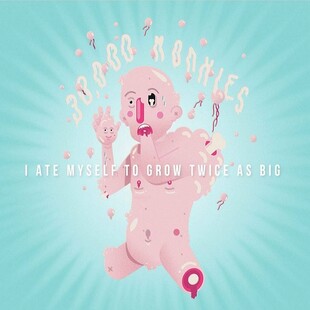 I enjoyed the opening track on a 100 song long compilation that I reviewed a few years back so much I not only went and acquired the band's EP, but bought a t-shirt too. The band are 30,000 Monkies, and naturally their return, their debut album, is one I jump head first into.

From the tongue in cheek grotesque artwork, to the adventurous formation of their music, the Belgians seem to be driven by playful and artistic urges. The potential influences that are evoked as you travel through their music are numerous, and the skittish distortion leads to a head fuck that is both unnerving and fun.

Lightning Bolt angular but containing enough structure to not fall into freeform detachment from the listener, awkward but not overbearingly so. The heaviness is welcome too, and there's a feel of recent KEN Mode, and that's just by the end of track one Melina, all in all an awesome beginning.

As the album progresses, the darker the sky. Mountainesque II is riff led and increasingly dense goodness, to warm the souls of Melvins fanatics, while the following Apollo 10 is pure doom, with an eerie atmospheric, one only slightly dented at by surely piss taking (in a Mighty Boosh, Howard Moon vocal pastiche of a doom interlude kind of way) chant of "SPACE" a few times at its end.

Perhasps not though, as this merely leads into Mountainesque I which approaches dangerously close to Gnaw Their Tongues swamp-marsh/asylum territory. The closing Juice wades in even further - the relative light heartedness of the opening is seeming days away all of a sudden. This is bold; unsettling but absorbing.

For all my endearment, for all the highs, there is, inevitably perhaps, a fair bit here that flys by with bewilderment being the most positive of emotions raised of those I could criticise with. But dig around and you find a band getting closer to harmonising the desire to fuck around with musical stylings and at the same time feel coherent than many of their more established peers. The lean into darkness gives it a tangible threat that disables your ability to find a base, a standing; a vertigo to embrace.

Fuelled by the ramblings of Harvey Milk and The Jesus Lizard, warped by the leftover bong waters of a demonic doom presence, 30,000 Monkies sound like many, and yet like none. I'll still wear that t-shirt with pride.