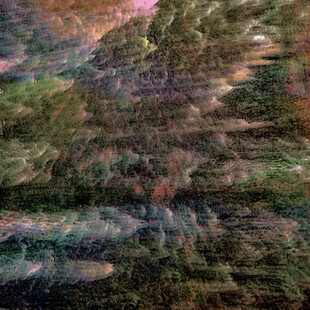 An echo through the mountains shakes a crevice, the vibration triggers dislodgement, in turn begins to snowball, increasing in mass and velocity, blurring into an avalanche of immense magnitude and increasing destruction. So feels Ghold's recent charge, a momentum of creativity that is progressively devastating, imposing and insuppressible.

Only a year on from their Ritual Productions debut and they're already returning, emblazoning a restless inventiveness. And as they go forth the deeper the depressive trip they take, PYR being every bit as bleak, and arguably even more impressive than Of Ruin. Having increased in members by 50%, the now three piece seem invigourated to take their doom to new depths.

The bellowing chant of Collusions With Traitors is buried beneath behemothic density, rolling onward like the caterpillar tracks of a tank, carrying serious menace and armament in smooth propulsion. A swarming noise rattles you to its end. Blud is a nightmarish atmosphere, enshrouding a fierce pummeling of instruments, characterising a rage more acute than previous, further darkening the mood of an album yet to offer a shard of light. CCXX is initially held at the leash, but unsettling in it's droning doom, the upturn in tempo arriving unexpectedly, the variation of deathly intent bequeathing a thrilling hold across the whole eight and a half minutes.

That's quickly drowned in size by Despert Thrang, all twenty one minutes twenty six seconds of it. Jitterish outbursts of grating guitars arise then disappear, faint chants in the disarming quiet, blacked out by blunt attacks of heaviness. Something of a song breaks through nine minutes in, Conan-esque in rhythym and vocals, for a few minutes at least, the remaining ten minutes a noise infected lesson in minimal menacing atmospherics. It's an ordeal to sit through, not in negative connotation, but also not one I envisage putting myself through too often again. Something of Her Old Fire pulls slightly toward label mates Bong and their patient, dredged earth doom dirge.

Even since Of Ruin Ghold have put out a split with Dead Existence, played numerous times, and blessed the masses at Temples, Damnation and more. An urge to produce, to perfect is seemingly driving Ghold, honing their sound, sharpening their focus and poisoning their intent, the outcomes increasingly dominant and distinct. Long may that fire burn.