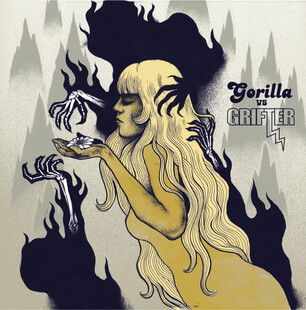 This is titillating. A split release from two of England's finest stalwarts and upkeepers of the hard rock underground, released on the superb Hevisike, mastered by Mos Generator's Tony Reed, with dazzling artwork and cool as fuck vinyl.

Gorilla's press seems to revolve around frontman Johnny's other band, The Admiral Sir Cloudesley Shovell, but Gorilla have been around for decades now, and it's great to see they're still kicking, with an obvious ethos to leave everything out there - every riff, every drop of sweat - whether on stage or in the recording studio. Amid the bluster and front is a filthy rock n roll attitude focussed on good vibes; Motorhead dancing at a stoner rock keg party. This revery is so acute that opener Both Barrells sounds like Lemmy... on speed! Err... yeah, okay, it sounds just like Motorhead. Slay Rider could be from the early Fu Manchu - Return to Earth early - back catalogue, with the rough, whiskey drenched fabric of Alabama Thunderpussy in their stoner groove, all the more delicious for it, while Three Squeeler is pure rock celebration.

It's always great to hear new Grifter recordings. They were never short of confidence in their early days, and the years since have only enhanced that assurance, backing their strut with golden tracks. Their effervescent attitude is evident as they roll, and with songs like Paige Turner they're sounding stronger than ever. The cheekiness in their uplifting rock is bolstered by unashamed groove harking back to 70's hard rock, in glorious passages in Failing Asleep or throughout Hi Wasted, especially during the harmonica assisted latter phase. Grifter have the happy knack of being able to continue to write track after track in roughly the same vein yet still sound exciting, never tired, and so it continues here.

With all the efforts that go into arranging split releases, especially here, by label, bands and affiliates, before you even get to listening, you only hope the new music encased within - the essential product after all - is worthy. Gorilla and Grifter give their all, rock out and do themselves proud.