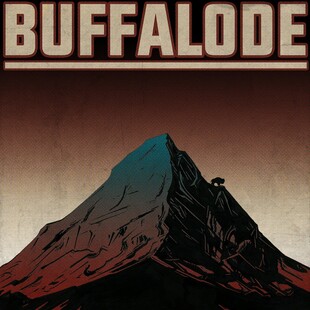 Buffalode...yeah, a name to remember - oddly enough saw a truck with the word Buffalo on the side with a reference to a load underneath, I actually thought that would make a good band name, and lo and behold! Someone thought the same.

Now, this two piece hailing from the home of good sausage (Lincolnshire) could be easily classified into the whole Big Business, Royal Blood category that has its limits. However they have something else which is something they self-describe as Mark E. Smith with a beard; and you know what? They’re not wrong.

Inside their self-titled EP, you are greeted with Cane Toad Purse, which indeed sounds very much in the vein of put fuzz on your bass, add some octave for good measure (as always) get a basic drumbeat and you’re away. It does feature the archaic vocals which is where Buffalode have managed to have what is unique in a mass of duo’s following in the wake of God Damn.

Maybe I’m a Mollusc comes in next with a very Kyuss/QOTSA bassline matched with some stereotyped drum patterns, the vocals are asking the listener questions, presumably about being a slug, snail or some shit. The song doesn’t really do too much else except groove from the beginning to the end. What else can it do? Mind you, what else do you want it to do?

Dinocalypse Now creeps in, potentially the standout track on the whole EP, but then again, you may be hard pressed to tell the difference in each track. The vocals are not my cup of tea, it’s like John Cooper Clark and Mark E Smith are arguing about it raining in Manchester or whatever they usually piss and moan about. Which is either the best thing about this or the worst if you’re not a fan of either. Go figure.

Closing this EP is The Last Honest Man, a cacophonous mix of drums and that same fuzz-octave-ridden tone that has pushed its way into your head for the past three songs, this is potentially the most structured song on the EP (for me anyway). The riff is pretty straightforward and somewhat predictable.

Vocals are reminiscent of that kid at school who was prone to nosebleeds and temper tantrums, interesting stuff. Almost like Television meets alcohol, meets rage and ends up in Manchester...and it’s fucking raining again.