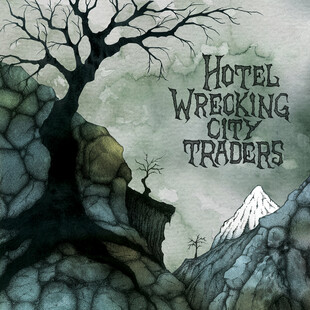 Almost two years to the day since I reviewed their last album Ikiryo Hotel Wrecking City Traders return. They've been busy - splits, single releases and more have kept us sweet, but a new full length brings true gratification. Always honing their craft, ever evolving, it's an adventure merely tracking their progress.

The Australian duo have long since severed (in the main) their stoner rock origins, leaning into post-metal richness in latter years. But here, they've taken those building blocks and created a ladder to the stars. Phantamonium presents four tracks over more than 40 minutes of profound instrumental scope, out-there space rock strapped to post-rock intelligence, taking the best elements and cancelling out the negative connotations of both, so the freeform of the former is never lost within its own spiralling trip and the purposeful structure of the latter is never mechanical or forced.

The "space echo" is the defining sound of the record, listed as instrument against both Wreckers, welcomly ubiquitous. Momentum is built patiently, but always with a restless tension - the title track changing from the subtler end of Pelican's history to 5ive-ish expansive yet clustered bursts. The sheer frenzy they create on Drone and Disowned (pt 1) could be that of modern psyche masters such as Causa Sui, or the bold we-go-anywhere approach of British bands such as their split mates Hey Colossus, or Mugstar.

It's rare an instrumental album doesn't make me pine for vocals at some point - here it's only as an afterthought while reviewing that I even consider their absence. This is an album of beauty, one that will attract, with an irony, stoner fans drowning their scene's lost vibrancy in space rock jams, as well as (hopefully) a much wider audience of willing souls. The 'Traders have always delivered, but never as they have here. This is stunning.