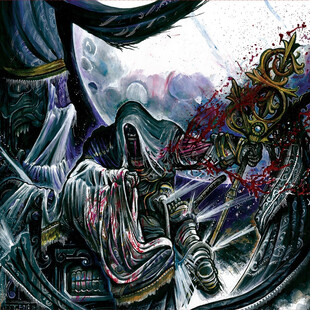 The Throatruiner imprint attached to a new release is worthy of attention alone, the French label consistently brilliant and atune to certain downcast hardcore mindsets. As such, this debut album demands attention.

Verdun, from Montpellier, don't disappoint either. More than that, they've created an album many others, worldwide and world weary, have strived for yet never achieved - a grand doom statement. The vocals are the prominent first scene-setters - an odd bedfellow coupling of Om spoken word mantra and passioned hardcore harshness. But the absolute atmosphere is defined by a coldness to the trudge - as Mankind Seppuku stumbles on, it emits a trepidation, a realisation that there is no life here, no warmth to cling to. There's a hard fought restraint, even when it lurches back toward the bitterness, maintaining a menacing structure as if against it's will to break lose and cause true havoc.

Following a lengthy intro, Self Inflicted Mutilation is once again more held-back doom, trapping you with the threat of imminent bludgeon, teetering on it's leash. This is deeply involving... a mystical tinge, like the aforementioned Om set within crushingly doomier confines. Dark Matter Crisis envisages a mysterious temptuous path that leads onto an aggressive hardcore vocal over sludge-slow doom trance. It constructs - no it evolves, the changes feel more organic - so deceptively that by the time it is smacking you round the head you don't even realise.

Glowing Shadows is the first time the album lets up in maintaining my attention, and as the first half of album closer Jupiter's Cove similarly washes by, I'm concerned the album is ending as a damp squib, releasing it's dominance. But then the prodigious second half kicks in, blows away the cobwebs to put any dismissive thoughts to bed. As the two vocal styles co-join to the ending lament "I was dead, and now I'm alive" it's stated as regret rather than in promise or redemption.

A truly interesting, utterly captivating record, a monumental doom statue that follows the epic journies forged by Pallbearer and the like, but forces them down untrusting darker alleys. For any band this would be some statement, for a debut it is phenomenal.