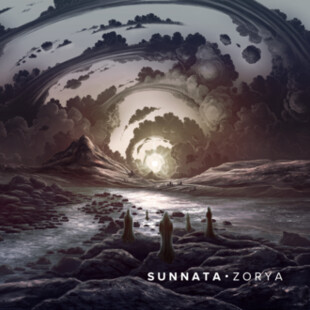 I received and read a few strong endorsements of Sunnata's debut album Climbing the Colossus from trusted sources, but it never sat quite right with me. Zorya, the Poles follow up out in April, holds an interest to see if it falls into place a couple of years on.

Sunnata are ambitious in their sound, always creating unique and impressive atmospheric planets per track, the opening Beasts of Prey a perfect example, where mind-expanding whirlpools gather pace before exploding into heaviness. The cycle gathers pace, riffs passing round at increasing regularity, the drums pounding harder each pass. Zorya is a world of its own again, heavy from the off, Sunnata admirably unswerving in the formula of riff repetition to lull your senses. Layers are added periodically, the demonically dirty guitar towards the end suggesting an apocalyptic demise for its inhabitants.

There are moments - the opening of the title track, too often on the following Long Gone and elsewhere - where the vocal style jarrs against the study and patience in building a hypnotic state, too weird, too stand out to maintain the spell, a disturbance to your submission to the grim charm. There's an odd clunkiness to the sludgier edges (see the dissappointing closing Again and Against) that betrays the grander album feel.

The hallucinatory blur of the protracted doom and stoner boundary are explored with abandon - there's plenty to mine here for fans of Swedes Monolord, Cities of Mars or Moon Coven, and the ongoing battery of recurrence does lend Sunnata this terraforming ability to mold their songs into unique bodies to explore. Yet, as before, I have my reservations, the vocals not fitting, or the feeling that they could take this to a whole new level and seriously blow minds. For now, and for the record, this is still a fine album, just not one to win me over yet, but will be adored by those already bewitched.