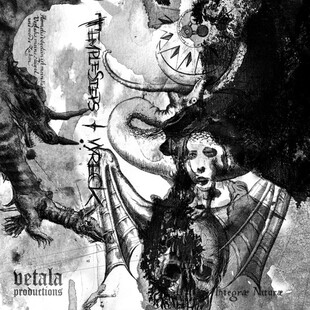 A new tape release from the admirable Vetala Productions, pitting two bands fresh from attention grabbing demos last year - Lincoln's finest two piece against Wreck from Germany in a battle to the bottom of the well of doom desperation. I'll get my disclaimer in now - Temple Steps are half populated by my ninehertz partner in crime Mike, so take in my wisdom below with that in mind. A word too on the artwork - an appropriate visual created by a member of Wreck, which will adorn the green, yellow or black cassettes within.

Temple Steps have regressed from the already desolate misery of their demo tape, this practically an audio suicide pact. The stark lethargy makes even the next note feel like an event, one that expands all energy simply to reveal, so encumbered by its own filth, forsaken doom for the oppressed. They occasionally threaten to string together some attempt at momentum, particularly on Cursed and Set Below, sluggish head nods breaking the trance, but such free-flowing indulgence is only tolerated transiently. The steady despondency holds a strange transfixion, holds you in a catatonic state that, the sheer heaviness aside, is hard to explain, especially as to why you'd go back to it again and again, as I find myself succumbing to repeat listens.

It is only against the flip side of this cassette that Wreck could be considered a light relief, but just the minuscular lessening of doom burden on the guitar sound alone does just that. Yet their own unearthly depravity doesn't take long to set in, the vocals strained and painful as if beseeching toward some benevolent presence to end an unseen suffering. There's a basicness to the repeating riff on On the Gallows that lends it a spotty 80's death metal feel that is oddly heartening, while Unleash the Drones staggers across wastelands of deathly vocals, doom paced riffs, brief moments of light shadowed by screech and cymbal clash.

This is a miserable, decayed pairing of downtrodden outlooks. Yet the dispiriting doom and metal framework in which they are ripened perversely only invites you to revel in the perspective.