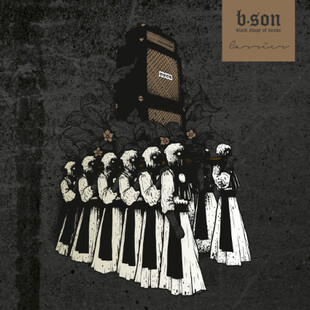 The cover is spot on. Apt artwork of disciples carrying aloft their lord of worship, the amp. Kindred spirits of Belfast's Slomatics, Black Shape of Nexus have been chiselling away at a monolithic doom slab for over a decade now, working towards a pure artistic creation of doom tone and weight.

Furthering that lifetime goal is Carrier. From the moment the first track kicks in, it feels good to be back in the world of the German six piece. The track in question, I Can't Play It, is a minacious trudge, primal, depraved doom. Vocalist Malte Seidel, a truly intimidating proposition live if you've ever had the pleasure, adds to the debased mood adroitly. Lift Yourself follows, a mechanical, low beat ambient three and a half minutes blasting out to an almost grind splurge ending.

Sand Mountain is the jewel in the crown, utterly entrancing, metronomic riff repetition, over and over, creating a forcefield that is almost psychedelicly unyielding; Nexus the hypnotist, the riff the pocketwatch across your eyes, back and forth, back and forth, drawn in, all outside influence blurred. It's magnificent, heaviness bleeding from its core. You are given no time to recover your senses, Facepunch Transport Layer arriving immediately, by which point you know this is another special album. Slowly building, a tension arising as it constructs towards an unknown denouement, tightening its grip, instilling an intensity; maniacal vocal noises threaten in the background, adding again to a weird trippiness uncommonly unalligned to such menace and doom heaviness. And then, after eight minutes, its over without any big bang release or relief, content in leaving you a little shaken.

Sachsenheim offers a more traditional roar, part Thou sludge, part baked Rwake and a to the point Conan-esque riff ending, and the album closes with an suitably demonic cover of Hellhammer's Triumph of Death, relatively faithful in its interpretation, but while on its own is a magnificent proposition, somewhat breaks the spell of B:SON's own creation. It is a meagre minor complaint on an otherwise great record. Always a little disconcerting, an unscrewed variation on the doom staples of riff and heaviness, our world is all the greater for having Black Shape of Nexus in it, all the more at the release times of albums as good as this.