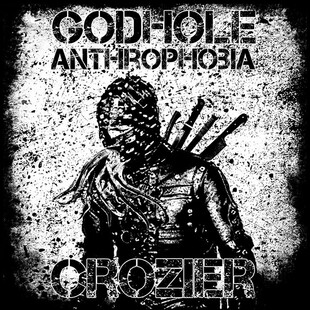 It's actually quite difficult to make grind sound more unpleasant and abrasive than it already does isn't it? As if breakneck-speed drums, distorted and abused bass and guitar and screamed vocals need anything else crammed into the mix.

That said, Crozier, Scottish harsh noise legend and cultivator of Vile Noise Records does Godhole a favour here, adding in blunt, forceable edges to the already crushing sound. Crunches of static, screaming arcs of feedback and broken electronics imbue the palpable anger with a diseased feel. Songs here barely scratch a minute, the sheer catharsis bleeding through in sharp, short shards. Lyrics seem borne of desperation, and are delivered with enough variation to have multiple impacts.

This feels like reporting on a war rather than a bunch of songs. Think the blunt trauma of bands like Benumb and old Agoraphobic Nosebleed mixed with a Swans/Sightings/Today Is The Day awareness of making the listener truly uncomfortable.

The levels of noise that Crozier laces these tracks with is incredibly varied, sometimes combining his fetid touch to the end of guitar lines, at others taking over completely with a digital fog descending over the proceedings. See the 8-second The Ape for an instant example. Like being driven into by the business end of a shitty stick.

Wade in with caution, these tracks seem contagious.

As ever, great to see labels clubbing together to get art like this out, the frankly amazing people involved are: FHED / Hackebeil / Mind Ripper Collective / Rad Nauseam / Rip Roaring Shit Storm / SuperFi / Vetala / Wooaaargh